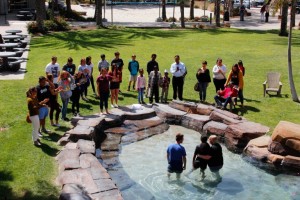 Every church loses people. It’s a natural part of living in our current culture. Two to three percent will likely move away – more if you’re in an urban area. One or two percent will die. And some will just fade away and stop attending without connecting to another local body. Obviously these figures will vary depending on your local context.

You can’t stop people from moving. You certainly can’t stop them from dying. But there is one group of people you can do something about. Some of the people who leave are people who started attending, became regular attenders or even members, and then fell away within a few months because they never really became rooted. They simply didn’t stick.

There are only two ways to experience net growth as a church: reach new people, andkeep the people you reach. And you must focus on doing both of these.

The biggest single difference between churches that are growing and churches that are struggling is that growing churches invite new people well. Promoting your church through advertising is a great idea, but most of the people who actually walk through the doors and experience what your church family is all about are people who were personally invited by a friend or family member.

I believe social media is an extremely powerful medium for outreach because of its relational nature. Running a traditional advertisement in a newspaper or on television will give your church exposure in the community, and some may attend as a direct result of seeing a particular promotion. But with social media, the story of your church will spread from friend to friend, by natural referral.

It is interesting that an overwhelming percentage of people who visit your church on a Sunday do so because of the personal invitation of a friend or family member. But most people don’t actually join a church as a result of being invited by a friend. People commit to membership for other reasons. People join after they’ve listened to the preaching and the music, gotten involved in a small group, or discovered something about your church that connected them more deeply.

Getting the word out about your church and equipping your current attenders to invite their friends is only half of the equation. You must also focus on helping people sticklong-term, and the one single key to this is relationships.

Keeping the people you reach

People will attend your church because of an invitation, or perhaps because of something they’ve seen or heard concerning your teaching content or your approach to community outreach. But people stay when they develop a deeper and more personal connection to the body. They will come because they’ve been invited, but they will stay when they feel personally invested in at least two ways:

Purpose driven churches are very intentional about moving people inward and outward at the same time.

Your church members must be equipped to invite others to attend and to belong. And then to keep those who belong, the leaders of your church must work very hard on two particular tasks – plugging people into groups, and connecting people in a ministry. The new attenders who will be part of your church a year or two from now are those who join and group and who join a team.

After a big day, like Easter, when you’ve had an enormous influx of new visitors, it is vital to make it as easy as possible for people to know how to take the next steps of finding a small group and volunteering in an area of ministry.

Rick Warren is the founding pastor of Saddleback Church in Lake Forest, Calif., one of America’s largest and most influential churches. Rick is author of the New York Times bestseller The Purpose Driven Life. His book, The Purpose Driven Church, was named one of the 100 Christian books that changed the 20th century. He is also founder of Pastors.com, a global Internet community for pastors.

By Trevor Grundy Pentecostalism is one of the fastest-growing movements in world Christendom, with...