Home
›Missions›ROBERT HOUGH, MISSIONARY TO CUBA DURING THE CASTRO REVOLUTION 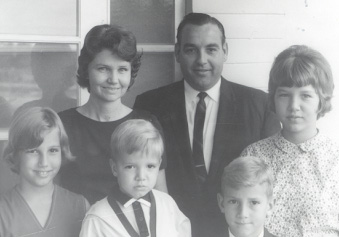 Robert Hough was the first graduate of Southwestern Christian University to become a missionary. Known as “Bob” to his many friends, he moved his wife, Velda, and his daughters, Robin and Faith, into the boiling cauldron of the Cuban Revolution led by Fidel Castro in 1957. Cuba at the time was ruled by Fulgencio Batista, a corrupt dictator.

Bob had a burning desire to bless the Cuban people. As the political climate and the military conflict continued to heat up, it made the challenge for ministry and protection for his family all the greater. Bob would pull mattresses into the middle of the house away from windows at night, attempting to make his family a little safer from sniper fire.

Bob was a skilled builder. While driving home from a September day of work on the church at Eltadil in 1959, he was stopped at a Batista checkpoint. The soldiers arrested him and took him to an interrogation camp. Bob was accused of being sympathetic to Castro and was sprayed with diesel fuel to torch him alive.

Bob begged for his life, asking the officer to call the Eldatil checkpoint, where the Batista soldiers knew him. The commander dialed several times, but no one answered. Bob continued to plead and the commander told him he would call once more before torching him. This time the commander connected with the checkpoint and the soldiers vouched for Bob. The earlier calls had gone unanswered because the soldiers were enjoying themselves in a bar and didn’t hear the rings.

Batista launched Operación Verano on May 24, 1958 with seventeen battalions, as well as tanks, planes, and ships. Batista planned to enter the Sierra Maestra and force a showdown with Castro’s rebels. Though greatly outnumbered, the rebels repeatedly inflicted heavy casualties on the army and drove them back. Columns commanded by Fidel Castro, Che Guevara, Camilo Cienfuegos and others, took on army units many times their size.

Batista’s army was unprepared for the jungle fighting conditions and Castro’s guerilla style of warfare. Desertion and surrender were commonplace among the dictator’s forces.

Castro was a brilliant propagandist who won the hearts of the people, and they received him as their liberator. Castro fought with ambushes of army columns, hit and run attacks, assassinations, and sabotage of the nation’s infrastructure, such as bridges, trains, and refineries. The goal of this psychological warfare was to convince the Cuban people that the corrupt Batista government was impotent at protecting its citizens.

The dictator began flying his family out of the country in December 1959. Some went to Jacksonville, Florida, and were met with curses at the airport. Batista fled to Spain on December 31, 1959, having amassed a fortune estimated at $300 million through bribery and embezzlement.

With Batista in exile, the forts in Havana surrendered, and Castro’s forces occupied the city in January 1959, bringing the revolution to its conclusion.

The people of Cuba soon discovered that in supporting Castro’s revolution, they had jumped out of the frying pan into the fire. Communist ideology took over Cuba, locking the island down and throwing away the keys to freedom.

The United States recognized the new Cuban government, headed by Fidel Castro, on January 7, 1959. However, bilateral relations deteriorated rapidly as the regime expropriated U.S. properties and moved toward adoption of a one-party Marxist-Leninist governmental system.

The U. S. Consulate ordered all American citizens to leave the island in 1960, with a window of escape of only 24 hours. Bob faced reality and sent his family to Florida. Velda left with three children and only one suitcase. Friends wired the money for the plane tickets.

Bob was accused by Castro’s functionaries in 1961 of being a CIA spy and given 24 hours to flee the island. He sped for refuge in his 1955 Chevrolet to the Guantanamo Naval Base on the island’s southeastern tip. Four Cuban believers accompanied him to give him protection. The military policeman at the Guantanamo gate looked at his papers and permitted him to steer his car into the fortress.

“The nearest to heaven I’ve ever been,” Bob said, “was driving my car under Old Glory at Guantanamo; the American flag has never looked better.”

Bob was given a bunk in the U.S. barracks to sleep for the night. The next morning a military policeman told him Castro’s guards outside the gate had arrested the four Cubans who rode with him as protection to Guantanamo, and were threatening to execute his friends unless Hough surrendered his car. U.S. soldiers helped Bob push the car through the gate into Cuban hands. He later learned his car became a government taxi.

Bob was IPHC’s last missionary to depart Communist Cuba. At the time, the Cuban Conference included 11 churches. He had been a pioneer IPHC missionary and builder in Cuba for four years when he escaped Cuba in 1961. He left behind a home with its furniture and appliances, as well as the clothes in the closet. The house was located on a small farm he had purchased with the vision of building a Bible School.

Bob and Velda reunited in Florida and pastored churches in Tampa and Daytona Beach. He then accepted an appointment by the IPHC World Missions Board in 1969 to serve in Mexico. While in Monterrey, Bob assumed responsibility for the construction of the Bible School campus in Monterrey. Bob and Velda served together in Mexico until 1974. Bob also served twelve years as superintendent of the Texas Conference and as a member of the IPHC General Board of Administration.

Four children were born to their union. Robin Elizabeth, their firstborn, became a registered nurse and served until her untimely death with cancer in 2001. Faith Ellen lives in Oklahoma City and serves as an account executive in an insurance company. Robert Joel (Buddy) is currently medically retired due to a tragic motorcycle accident. Buddy was born in Cuba. Charles Bryan is an entrepreneur who owns a fishing business in the Gulf of Mexico and serves as a fishing guide.

I had the privilege to get to know Bob and Velda and their young family in the early 70’s. I was serving as director of religious life at Southwestern Christian University, and in those years led an annual missions trip of college students to Mexico. Bob and Velda worked hard to make the students comfortable and at the same time introduce them to the challenges of missionary life.

Bob married Marjorie Townes in 1996. She has been faithfully by Bob’s side since then, including his extended illness.

Forty years after Bob escaped Castro’s dragnet, I had the privilege to lead a Heartland Conference team to Cuba, and invited Bob to join our group. Our goal was to build a church and conduct a pastoral seminar. Bob’s goal was to enjoy a reunion with old friends. It was Bob’s first trip back to the island in four decades.

We were surprised how many Cuban people remembered Bob and welcomed him with hugs and lots of tears. It had been 40 long years since he had fled to Guantanamo with the shirt on his back. He left behind Cuban brothers and sisters whom he deeply loved and who loved him. Bob certainly deserved the blessing of that trip, and the reunions were beautiful to witness. He was even able to drive by and see the farm and house to which he had once held title, but had to leave behind.

Cuba remains to this day a Communist island in its governance. Known only to God are the many believers who have been jailed for their faith, as well as those who have given their lives as martyrs under Cuban Marxism. But the Lord’s church in Cuba has survived all of its trials and tests, and is alive and well. In fact, Communism has failed in its efforts to stop the advance of the church in Cuba. Today, IPHC has 114 churches that are thriving on the island!

A fascinating story about missions and God’s providential care.   Painting of the Steamship SS...