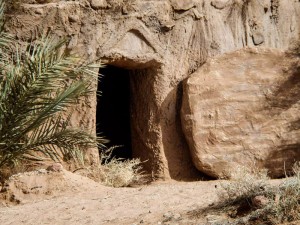 Jesus’ visit with His disciples to Caesarea Philippi was a red letter event in the Lord’s ministry. There, up in the Golan Heights, Jesus gave the prophecy of the birth of the church (Matthew 16:18). Immediately following that great proclamation, Jesus began to prepare His disciples in another prophecy for His death and resurrection: “The Son of Man must suffer many things and be rejected by the elders and the chief priests and the scribes and be killed, and after three days rise again” (Mark 8:31; see also Matthew 17:22; Luke 9:22).

A few short months later, the Lord was arrested and tried in the court of Caiaphas, Israel’s high priest. Jesus was convicted of blasphemy and sentenced to death. He was crucified just as He had prophesied. But on the third day He walked out of His tomb. It lives to this day as the greatest miracle of all time.

Some say this gospel story is simply unbelievable, alleging the resurrection of Jesus is the greatest lie of all history. Others say the early church apostles put statements in Jesus’ mouth He never said. But anyone who studies the Gospels with an open mind will recognize Jesus spoke compellingly to His followers. What Jesus said and the apostles taught is not a figment springing from the minds of deluded people. It just is not possible to wave away the authority of Jesus’ testimony to His resurrection. The Lord’s disciples’ witnessed to it for the remainder of their lives, and paid for their testimonies at the cost of their lives.

Jesus faced argument and contention throughout His ministry. But stand if you will with the Lord at His empty tomb where there is no one to dispute Him. The religious establishment, when the soldiers reported Jesus was missing from His tomb, did not go searching for Jesus to check out the news face to face. Their hearts were committed to protecting themselves and the self-righteous value system by which they lived (Matthew 28:11–15; Luke 16:19–31). Instead, the Sanhedrin leaders bribed the soldiers to change their testimony (Matthew 28:11-15).

The members of the Sanhedrin did try to cover their tracks. It should never be forgotten that religion will lie and even kill when its self-interests are at stake. With these first century Jewish leaders, this was true even though the ninth commandment of the Law they were so zealous about upholding forbade bearing false witness. Consider the deception they crafted to explain the resurrection: “His disciples came by night, and stole him away while we slept” (Matthew 28:12–13).

Think about it.  Can anyone in his right mind believe the resurrection of Jesus was a lie? The evidence is simply overwhelming. The testimony of Thomas is transparent. Jesus said to him, “Stop doubting and believe” (John 20:27). The conclusion is that doubt is a choice and it is made in the face of the evidence that is plentiful.

If Jesus was not resurrected:

If Jesus was not resurrected, the string of lies only continues:

If Jesus was not raised from the dead…

If Jesus was not resurrected bodily:

Lo, in the grave He lay
Jesus my Savior.
He tore the bars away,
Jesus my Lord.
Up from the grave He arose,
With a mighty triumph o’er His foes.
He arose the victor from the dark domain,
And He lives forever with His saints to reign.
He arose! He arose!
Hallelujah! Christ arose!

By: Frank Tunstall, D. Min. This lesson can be effective for high school and...

LIFE AFTER DEATH? PROVE IT!

By: Frank Tunstall, D. Min. The transfiguration of Jesus is a premier revelation that...

The Full Extent of Jesus’ Love

By: Frank Tunstall, D. Min. Is there a scene in the ministry of Jesus...

By: Frank Tunstall, D. Min. Raw evil has existed ever since Cain murdered his...

By: Frank Tunstall. D. Min. Lazarus was deathly sick, and he was Martha’s and...

Freedom of Worship – Will It Ever Be Lost? Consider Stephen’s Story

By: Frank Tunstall, D. Min. Stephen was a prophet who was full of the...

Who Is This Holy Spirit, and What Is His Power?

By: Frank Tunstall, D. Min. Joseph was a property owner from Cyprus, and a...

AGAPE, THE LOVE OF GOD

“THEY TWO SHALL BE ONE FLESH”

By: Frank Tunstall, D. Min. The institution of the home and the family traces...

THE HOLY SPIRIT AS PROTECTION

“Brothers, What Shall We do?” REPENT

By: Frank Tunstall and Phil Larson Join us as we pray and study...

THE HEAVENLY FATHER AS THE MODEL FOR EARTHLY DADS

By: Frank Tunstall, D. Min. The goal of this study is to choose four...

By: Frank G. Tunstall, D. Min. Philip the deacon was among those expelled from...

By: Frank Tunstall, D. Min. All children of God sooner or later will need...

THE FIRST SEVEN WORDS OF THE RESURRECTED MESSIAH

By Frank Tunstall, D. Min. The seven last words of Jesus from His cross...

Seven Perimeters of Defense By Frank Tunstall “Brothers and sisters, in view of all...

Jesus’ Passionate Cry – Then and Now

On the last and greatest day of the Feast, Jesus stood and said in...

Too Good to Miss! Seven Weeks After Easter

By Frank Tunstall Why is it so easy to go-all-out for Easter in many...