Home
›Middle East, Middle East›Why Christianity Is Surging in the Heart of Islam

Why Christianity Is Surging in the Heart of Islam 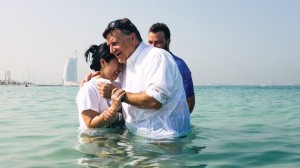 September 11, 2005  Sam Espada led friends in a chorus of “Happy Birthday” for his sombrero-wearing brother at a Mexican restaurant. After dinner, they saw the latest Hollywood blockbuster.

The five-story mall could have been anywhere in America, except that every storefront sign was in Arabic as well as English. The group was in Abu Dhabi, the capital of the United Arab Emirates (UAE).

“This place is like Disneyland,” said Espada, a Christian from New Jersey. “But I don’t feel fully free. You can definitely tell you are living in a Muslim country.”

Espada, an architect, is one of the millions of foreign workers transforming the former desert oasis into a global center for business and travel. The UAE’s Dubai is the fifth-fastest-growing city in the world; its population is now more than 80 percent migrant.

The great majority of migrant workers in the region come from India and Southeast Asia, sometimes suffering exploitation in labor camps to send a collective $100 billion back home. As an American, Espada is unusual.

But as a Christian, he is not. Today the Pew Research Center numbers Christians in the Arabian Peninsula at 2.3 million—more Christians than nearly 100 countries can claim. The Gulf Christian Fellowship, an umbrella group, estimates 3.5 million.

These migrants bring the UAE’s Christian population to 13 percent, according to Pew. Among other Gulf states, Bahrain, Kuwait, and Qatar are each about 14 percent Christian, while Oman is about 6 percent. Even Saudi Arabia, home to Islam’s holiest cities (Mecca and Medina), is 4 percent Christian when migrants are counted.

Together, they represent the largest Christian community in the Middle East outside of Egypt. But their experiences vary considerably.

In Bahrain and Kuwait, Muslims can enter church compounds. In Qatar, guards allow only foreigners. Saudi Arabia’s Grand Mufti (the nation’s highest official of religious law) has called for all churches in the peninsula to be destroyed.

Surprising to many observers is how many of these churches there are.

“We don’t really face persecution; we face misunderstanding,” said Bill Schwartz, formerly with YWAM, now the Qatar-based priest responsible for the Anglican Church’s work in the Arabian Gulf. “But we are building churches in every country except Saudi Arabia, and have good relationships with all governments.”

At least 17 Gulf cities provide land for more than 40 church buildings. Through them, the Bible Society in the Gulf legally distributed 41,000 Bibles, 10,000 New Testaments, and 115,000 pieces of Christian literature in 2013. “It shows the Christian community is here to stay,” said general secretary Hrayr Jebejian.

“People in the West measure religious freedom exclusively by the freedom of Muslims to convert,” said Schwartz, but he believes this view is too narrow. He grants that restrictions exist, and believes Islam at best “tolerates” non-Muslims. But the general freedom that Christians have to worship in much of the Arabian Peninsula issues from the Muslim faith and should be appreciated, he said.

Thanks also to global capitalism, that freedom is not going away.

In 2007, Schwartz’s church construction project in Doha, the capital of Qatar, missed a deadline to break ground. When he requested an extension, every official involved reassured him: “We won’t take this land back. There is too much invested in our public image.”

It is an image local Christian leaders are eager to promote. “Emiratis are not extremists. They are tolerant and want to live in the world in peace,” said Jim Burgess, pastor of Fellowship of the Emirates, whose 2,500-strong congregation meets in the luxurious Gloria Hotel in Dubai. “We want the government to know we appreciate this and want their attitude spread in the Arab world.”

His church participates in Easter services publicly on the beach. Last year, 39 expatriates were baptized in Gulf waters. And during this year’s celebration of the end of Ramadan, the ruling sheikh received Burgess and other local Christian leaders ahead of hundreds of prominent Emiratis jockeying in line for position.

“This was a message for those gathered,” Burgess said. “We believe God is answering prayer. We really need to get the message out that there are opportunities here that haven’t existed for 1,400 years.”

A quarter of Burgess’s fellowship identifies as non-Christian. Sixty percent had not attended church in years. Many are surprised by the opportunities to share their faith, even with Muslims, if done within a strong relationship.

“I never had more opportunities to preach the gospel end-to-end than I had here,” said Wael Qahoush, a Palestinian-American banking executive and deacon at Evangelical Community Church of Abu Dhabi (ECC). “I was apprehensive, always trying to hide my identity, and everyone wanted to ask me about Christianity.”

Like other churches worshiping in theaters or private residences, Burgess’s fellowship operates in legal limbo. But that Gulf churches exist at all stems from relationships, not economics or law.

In 1960, before the oil boom that propelled the region to immense wealth, missionaries with TEAM (The Evangelical Alliance Mission) were invited by tribal sheikhs to start a hospital in what is now the UAE after TEAM’s medical work in Kuwait and Bahrain attracted their attention. Half of local children and 35 percent of mothers were dying during childbirth.

In gratitude, the sheikhs allowed Oasis Hospital to operate a church. Today the Gospel of Luke and a copy of the Jesus film are available in patient rooms. Many royal family members were born in the hospital. In 2012, one paid for the national theater to host apologist Ravi Zacharias.

“God has shown this country the blessing of religious freedom, because of the kindness shown back then,” said Carol Rubish, a TEAM nurse.

But full religious freedom has not been extended to most Gulf citizens. The UAE barely made Open Door’s latest list of the 50 nations where it is hardest to be a Christian—but it still ranks at No. 49. Qatar is No. 18, and Saudi Arabia is No. 12. The US State Department notes restrictions in all Gulf nations, but officially designates only Saudi Arabia as a “country of particular concern.”

Rather than complain and lobby for international advocacy, Christians work quietly within both social and market constraints. “God is in control of Qatar and the Gulf,” said Schwartz. “And we will work with him here.”

Andrew Thompson, head of St. Andrew’s Church in Abu Dhabi, has forged strong links with local officials. The greater challenge is sharing his facility with other churches. On a weekly basis, the Anglican compound hosts 10,000 worshipers in 45 congregations, representing 17 languages. Space is scarce, and this occasionally results in bad behavior from Christian leaders seeking optimal meeting times.

But on behalf of his international migrant community, much of which is illiterate, Thompson has partnered with the Ministry of Labor and New York University–Abu Dhabi to translate labor laws for a mobile audio app. “Some say there should be a prophetic voice,” he said. “We want to be prophetic hands.”

Strong relations with the UAE’s royal family have also led to their endorsement of Thompson’s book, Jesus of Arabia, translating the message of the gospel into the culture of the peninsula. Complete with an appendix tackling Islamic perceptions of Christianity, it is a bestseller in the UAE.

“We rub shoulders with people from all over the world, so it is a dynamic place for kingdom impact,” said ECC pastor Cameron Arneson, who led the UAE’s Council of Evangelical Churches for nearly 25 years.

The council’s current leader, John Fulmar, agrees. “The confluence of peoples and cultures provides great evangelism opportunities,” said the pastor of United Christian Church of Dubai. “What I want is to have people move here and live openly as Christians living among the nations.”

Jayson and Julie Casper are an American couple living in Cairo, Egypt. Jayson writes for Arab West Report, Christianity Today, Lapido Media, and a few other publications. His writing focuses on greater understanding between cultures and religions, as the knowledge of deeper contextual issues can prevent escalation of tension and unnecessary rejection of the other. Jayson has a BS in economics and an MA in Islamic studies.

Julie is the primary caretaker of Emma, age 7, Hannah, age 5, Layla, age 3, and Alexander, age 1. They are four children full of life and love. She has a BA in music and an MA in music education.

Muslim Family Says Jesus Appeared to Them With a Specific Message

A Family Divided: Another Year Behind Prison Bars for Pastor Saeed Abedini

“Remember the Prisoners As If Chained With Them” The original article first appeared at...