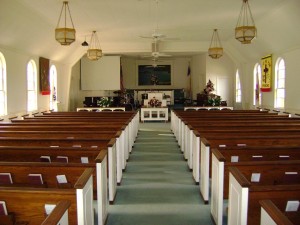 Christianity as a whole in America is definitely on the decline, but evangelical Christianity is not. Two common doctrinal values that identify evangelicals are belief in the Bible as the inspired word of God and the born-again experience. Based on this definition, Pentecostals are appropriately numbered among evangelicals.

This summary is according to the recent Pew Research Center study of the American religious landscape from 2007 to 2014. The complete study can be accessed at pewforum.org/2015/05/12/americas-changing-religious-landscape.

The losses in American Christianity are coming from the steep declines of mainline protestant denominations, not from among evangelicals. The Poll found evangelicals in America are winning new converts about as fast as they are losing them.

These findings should spark optimism in the hearts of all of us who classify ourselves as Pentecostal. At the same time it should challenge us to re-double our efforts to advance the Lord’s Great Commission. Without trying to be exhaustive, congregations that believe the Bible will also believe in the:

Five highlights follow from the US Religious Landscape Study, conducted among more than 35,000 adults in English and Spanish, showing how American religion has changed from 2007 to 2014:

Over the past seven years, even amid all of the pressures in American culture against the Gospel, evangelicals have lost less than 1 percent of their share of the population, holding steady at about 1 in 4 American adults (25.4% in 2014, vs. 26.3% in 2007) and preserving their status as the nation’s largest religious group.

The drop in Christian affiliation is particularly pronounced among young adults.

For one example. NewSpring is a megachurch in South Carolina. The church leadership  baptized over 6,500 people and worship attendance grew by 10,000 in 2013. In contrast, all of the Episcopal churches in America produced about 12,000 adult confirmations, accompanied by a drop in attendance of 27,400 in the same year. 1

2) The label “evangelical” is more popular among all Christian groups

Today, all Christians are more accepting of the term, “born again,” and more likely to consider themselves “born-again” or evangelical. Pentecostals lead all others in this area, with 86% of Pentecostals confessing to the born again label. This includes 72 percent of those in historically black Protestant churches, up from 67 percent in 2007.

3) Evangelicals convert many and retain their kids better

Pew found a “remarkable degree of churn” in the US religious landscape. But evangelicals are the “major exception” to the national pattern of Christian decline, and the only major Christian group in the survey that has gained more members than it has lost through religious switching.

Over the past seven years, evangelicals lost almost 8.5 percent of adherents and gained almost 10 percent for a net gain of 1.5 percent since 2007.

By comparison, Catholics had a net loss of nearly 11 percent due to religious switching, while the unaffiliated had a net gain of more than 13 percent. This suggests when the switches are made, the higher percentage are gravitating to independent churches. The share of evangelicals identifying with nondenominational churches has grown from 13% to 19%.

Pew found “there are more than four former Christians for every convert to Christianity.”

Hindus and Jews continue to be the most highly educated religious traditions. Fully 77% of Hindus are college graduates, as are 59% of Jews (compared with 27% of all U.S. adults). These groups also have above-average household incomes. Fully 44% of Jews and 36% of Hindus say their annual family income exceeds $100,000, compared with 19% of the public overall.

This area of the study – retaining our children – should cause great concern and spark prayerful reevaluation in Pentecostal ranks. It should also cause us to appreciate even more our church colleges as we work to make them even more attractive to our young people.

Today, more than one-third of US adults are non-white who identify as born-again or evangelical Protestants, regardless of denomination. These include Black, non-Hispanic, Hispanic, and other races. Clearly the American evangelical church is becoming more ethnically diverse, with the Hispanic population of believers growing the fastest.

Three-quarters of evangelicals marry coreligionists, more than historically black Protestants (65%), mainline Protestants (59%), and the unaffiliated (56%). This may account for some of the steady evangelical numbers,” Pew reports, “as married people tend “to be more religiously active than unmarried people.”  (The study only examined marriages that were still intact.)

This aging of the evangelical community should also spark prayerful introspection and much study.

1Ed Stetzer’s Blog, The Exchange (May 15, 2015). “The Evangelicalization of American Christianity: My Piece for The Washington Post.”
2 The Pew Study study gives no information to suggest how individual denominations, like our own IPHC, is continuing to grow.